What if?
What if the president declared martial law?
What if the Constitution was suspended?
What is corporatism and fundamentalist Christianity ruled supreme?
What if the secret police came knocking on your door? 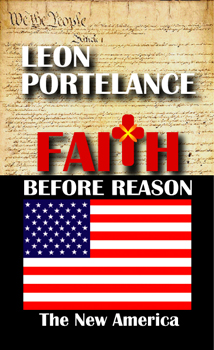 ISBN 0-9769592-2-4
Publisher: Ramsey Books (www.RBooks.org)
Fiction: Political/Thriller
Perfect Bound Softcover - 251 Pages
Retail: $13.95. All copies of this book purchased on the author's website will receive a discount of $3.95 and an autographed copy of this book, for only $10.00! Available at www.RBooks.org and all major online bookstores.

Chronicles the plight of six average Americans as they struggle against the evil fascists that have taken over the White House and the country.

Welcome to the New America! It is 2010. The country is ruled by the iron fist of the president turned dictator, John M. Forrest, known only by his middle initial. The Constitution has been suspended. Congress is now little more than a rubber-stamp for the Executive Branch, and martial law has been imposed from coast to coast. Fundamentalist Christianity and corporatism rule supreme: faith before reason.

An unlikely group of heroes band together--Eileen Hunter, a lesbian and former soldier; Terry Khan, a Muslim boy; Archie Kane, a middle-aged, liberal school teacher; Jack "JD" Daniels, a computer hacker extraordinaire; his mother, Shirley "Daisy" Daniels, a colorful old hippie; and her friend, Sam Brown, a Native-American and Vietnam vet--to struggle for their very survival against the evil forces of sadistic Commander Hermann Gotthard; his side-kick, Captain Paul Johnson, of the NYC SSB (Special Services Branch) and Colonel James Davenport, Commandant of Camp Southern Fortress, a brutal concentration forced-labor camp in southern Texas. Their only crime is their mere existence. Their only hope is to make it north across the forty-ninth parallel into Canada, which is still a democracy. Read an Excerpt.