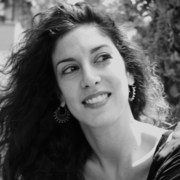 I have a bachelor degree in music from Royal Holloway University of London, where I am currently doing my Master's degree in composition. I am energetic and motivated composer. My works have been performed in several festivals and concert’s halls around the world, such as the California Institute of Arts (Los Angeles/2008), Los Angeles City College Composers’ Club’s Concerts (Los Angeles/2007-2008), Ekon Festival (London/2009), Philippos Nakas Hall (Athens/2011). In 2009, I had been commissioned by the classical guitarist George Tossikian to write original guitar music for his single album ‘Guitar Music by Greek Composers’ which released in 2010. In 2011, the ‘Crystal Ballet Ltd’ commissioned me to write original music for the upcoming project ‘Contemporary Ballet Suite’. The music performed and recorded in April 2012 by the ‘Crystal Ballet Decet’, contacted by Christina Athinodorou, in Berry Street Studios, London.