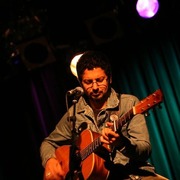 Robert John Sedky’s music prowess began as a choir boy singing in St Patrick's Cathedral.He picked up a guitar and started writing and playing, fine-tuning his craft. Within ten years he was a regular session player in professional studios all over Australia, this experience helped shape his own composing and producing in years to come. He studied at Latrobe University under Dr Stan Link and completed a Bachelor of Music degree focusing on composition. Robert has collaborated with International and Australian Producers: Tom Nichols (Eran James, Celine Dion) Charles Fisher (Air Supply, Savage Garden, 1927,The Celtic Tenors) He has also supported International artists: Elton John Dionne Warwick Randy Crawford Joe Sample Robert’s Film scoring began in 2006 with the short film ‘Know That He Cries’. After scoring six other short films Robert made his feature film debut in 2008 when he composed the score for the International film ‘The Red Sense'. In 2010 Robert composed the music for gritty Australian feature film ‘The Nothing Men’ Written and Directed by Mark Fitzpatrick where Robert received critical acclaim for his original score. In the same year he completed a national tour supporting Elton John. In 2011 he was chosen to mentor at LIVING MUSIC a non-profit organisation that helps youths break into the music industry. In 2012 he was chosen to record and arrange the acoustic version of Australia’s Got Talent 2012 winner Andrew De Silva’s release 'Your Paradise.' In 2014 he collaborated with Iconic Producer Charles Fisher as his principal orchestral arranger on the Celtic Tenors Album released in 2015. In 2014 His song ‘Sunset Hills’ became the official theme song for the Feature Film ‘Rise’ Written and Directed by Mack Lindon. He currently holds a lecturing post in Composition & Film Music at The Australian Institute of Music Melbourne campus.