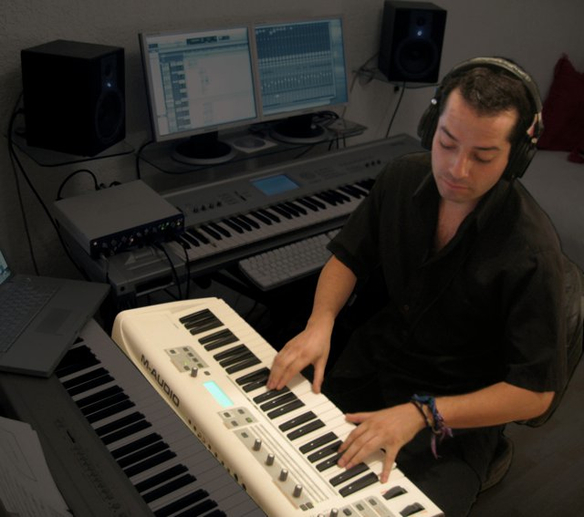 Born in Mexico City, and exposed to the cultural environments of Switzerland, Canada and Brazil, Novelli combines, composition, sound engineering and performing to gather in the Music production industry, while enrolled in the classical composition program at The National School of Music of Mexico (UNAM) he also studied the “Classical Recording Techniques” program al LIMME-UNAM. In 2000 joined in Rio de Janeiro the Grammy Awarded Brazilan-Jazz composer Milton Nascimento as part of the production crew for his Brazilian tour 2000-01. While in Brazil, Novelli received tutorials from well known Rio musicians such as Lincoln Chieb, Xande Figueredo and the celebrated Robertinho Silva. On 2008 he toke masterclases with composer/arranger Leandro Braga (Rio). As composer Novelli has been invited to present his work at SOCAN New Music Festival in 2003 (Canada) and in several Concert Halls of Mexico City. Various of his works have been Broadcasted at OPUS 94.5 and Radio UNAM 96.1 FM, both of them devoted to classical and contemporary music in Mexico and KCRW 89.9 FM Los Angeles. In addition, he composes Film Scores for several independent Short Film comissions and produces Jingles for commercial advertisements of international companies. In 2007 he founded in “X-Acoustic”, Label especialized in classical recordings, some of its releases are: “Sotto Voce” Les Chanteurs du Lycee choir (2007). “Rio Verde” Javier Nandayapa (2008). “Voces” Jorge Cordoba (2008). “Aural Imagery” Novelli Jurado (2009). His participation at the 2008 NYU-ASCAP Foundation workshop in New York, gave him further exposure to Film Scoring and Conducting his music with an orchestra made by musicians of the New York Philarmonic and the Metropolitan Opera House orchestra. He also has been selected in 2008 and 2009 by the Tom Jobim Foundation to attend the advanced course in classical recording techniques at the Campos de Jordao International Festival in Sao Paulo, Brazil, under the tutorship of Grammy Award winner, recording engineer Jakob Haendel. The course centered around recording an album performed by the Academic Orchestra conducted by maestro Kurt Masur. During 2009 attended the “Classical recording program” at the ASPEN Music Festival and School, through the Edgar Stanton Audio Recording Institute under professors Jack Renner (Telarc founder / 11 Grammy award winner) and Juergen Wahl (application engineer for Neumann and Urei). Music:life a specialized magazine has recently incorporated Novelli as an active collaborator. His abilities as a composer enable him to be in charge the composition column “Counterpoint”. In addition his expertise audio –recording made him “ad hoc” to conduct technical evaluations and reports as he does in the Scan section.