"Hey thanks. Though they are all pretty old ones. Have newer stuff on my youtube https://www.youtube.com/mwhitesidecomp and soundcloud http://soundcloud.com/matthew-whiteside . I hope you enjoy them as well. Matthew"

"Its a really difficult piece to play (the cellist needs massive hands!) but its so effective. Have a listen to this https://www.youtube.com/watch?v=WsGnf8zyCCc her cello writing I think is amazing.
Maybe if you are going to add such narrative details…"

"Ahh yes scores forgot to put those up. Should be attached now.

I know what you mean about the title but to me the title fits the piece because of what the piece is about. I dont mind people laughing at points (like they do in the recording!) or…" 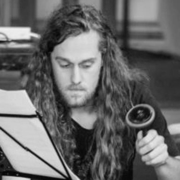 "i really like the string quartet, you should post some scores! i dont know if the title fits the piece at all. the title seems like a joke... and the piece does not sound like a joke. it's very well written for the strings, gliss's are effective,…"

"thought thats where I'd posted it :s sorry!

"
Hi E'Narda',
Not too bad a piece but it feels like its not sure what it wants to do. For me it sits in the middle ground between being interesting by being slow and not doing much (Feldman, Part etc) and being interesting because it does a lot…"

"Overall I like it but it needs to be longer. If you dwelt on the opening pedal longer and built up a bit more slowly it would feel like the busyness of the central section is more deserved. Also coming back so the A from the beginning at some point…"

"It sounds like the introduction to a song or the sketch of the instrumental parts to a song. I was expecting a Corry Tailor in stone sour guise voice coming in at some point. Maybe a way to take it to develop it a bit more."

"I would agree with Chris. Composition is something I do for the joy of it but its also something I would quite like to survive off. The only time I might release something under CC would be to publicise myself in the same way as people give away…"

"Yea any kind of teacher just to teach him to loosen up a little because what I was hearing doesn't sound like it will be good for his voice in the long run. Apart from that I cant think of anything else, good luck with the rest of the music."

By electronics do you mean as Ryan said midi or electronics as in electro-acoustic tape music? To me it is impossible for midi to be perfect because it uses samples which no matter how good are not a live instrument.…"

Though they are all very close and prob all 1st equal"

"Instant thought is Alter Bridge mixed with a bit of Nightwish so nice one with that. My main point of criticism would be the singer doesn't seem to be able to coup with the high notes he keeps trying for. His voice sounds really tight but I would…"

"Agreed with Tyler but perfection is impossible. What is perfection to one person is flawed to another. Even a composer can disagree with a performers 'perfect' rendition of his piece. Even if a piece is written for tape the only perfect performance…"

"I'm closed very closed, which is why I'm not going to answer the rest. Though Tyler's replies about hiding emotion ring with me. But I hope that my views show something about me.

To me a composer is a wiki article being continually edited by lifes…"
More…
Loading ...

Matthew Whiteside has graduated form Queen’s University Belfast with a Bachelor of Music (honours). His is currently studying Masters in Composition with Gareth Williams at The Royal Scottish Academy of Music and Drama. At Queen’s Matthew organised three Queen’s Composers’ Concerts. At these concerts he had performances of his Quartet No. 1, Untitled and The Space Within. Matthew has recently stepped down from the post of secretary of the Irish Composers’ Collective with whom he has had multiple performances in the Kevin Barry Room of Dublin’s National Concert Hall. These performances include two electro-acoustic pieces Youth and Imagined Notes both of which gained favourable reviews in the Irish Times. With the ICC Matthew has had a further three performances in the same venue, The Wavering Gorge, for violin and cello, Prevalence for percussion ensemble and Laya, for piano trio performed by Yurodny. Notable performances outside Queen’s have been a short opera, Puddle Wonderful, written for Spark Opera Company in November 2009 and Wondering, Wavering, Willing performed in Maccagno in Italy at the soundSCAPE music exchange by the American guitar and violin duo, Duo 46. He has also received and Honourable Mention in the 2010 International Music Prize for Excellence in Composition for this piece. Matthew is currently working on a second trumpet solo for Matt Mattera and a piece for cello, live electronics and a forth tape piece. He is also working on a lieder as well as a piece for a medium sized ensemble both to be premiered at Plug festival in Glasgow in 2011. He has received grants from the Bliss/PRSF Composer Bursary Fund and the Sir Hamilton Harty Scholarship in order to attend soundSCAPE and is also in receipt of the RSAMD Scholarship and May Turtle Scholarship to further his studies.