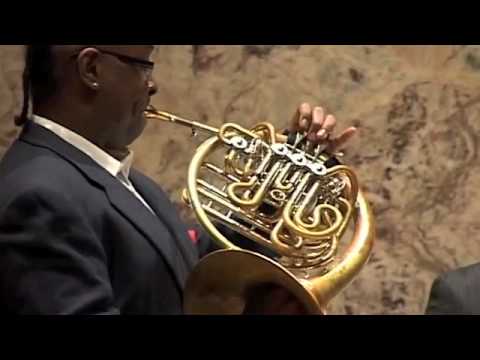 AACM NYC Concert Series. October 16, 2009The Quartet is:Tomas Fujiwara - drumsKeith Witty - bassChris Dingman - vibesTaylor - horn / composerAll the music we performed will be released on our new CD, titled "At What Age" which is due out next…
See More

This is the first piece from our performance on the AACM NYC Concert Series. October 16, 2009The Quartet is:Tomas Fujiwara - drumsKeith Witty - bassChris Dingman - vibesTaylor - horn / composerAll the music we performed will be released on our new…
See More Some bits and pieces from a recent gig at the Fabulous Jalopy Theatre in Brooklyn, NY! This was a CD re-release party for my debut disc "QuietLand" (Shot by Bathabile Mthombeni from the audience on her iPhone).Come hear more…
See More

Jade is a very old tune of mine and still one of my favorites. I'm glad you enjoyed it.

"I should have known that! I tend to lock in my bass lines early on, and forget that not everyone does.
For the Horn solo? Why, pItch sets, of course!!"

"Nice tune and would probably be great fun to solo over. I didn't really get a sense of "atonality" though. However, that's a LOT harder to do than it might seem - especially with basslines. Maybe you could flip the second half of the bassline…"

"Nice track! My feeling is, you use the best sounds you have at the time so that's that. One thing I really enjoyed was the brass figure at the end. It almost sounded like an African or Afro-Cuban 6/8 (12/8?) figure slammed up against all those…"

"Thanks for adding me. You guys have created something really cool here and, as much as I thought Sci-Fi would be my favorite channel when I FINALLY got cable, it turns out HGTV is! Of course, I am trying to learn to fix up this little coop we…"

"I decided to put my film music on it's own MySpace page. Anyone who is a MySpace user is welcome to join. Just go to http://www.myspace.com/marktaylorfilmmusik

"NIce article. I love your site and plan to go back and check out all the tracks!"

thanks for checking out my tunes! Now that things are slowing down (a little here, I plan to spend some time listening to some of the great music around here. Especially yours and Phil's!

"Finally put some music up here! More to come once I have a chance to finish off a few things. Be gentle, please. heh"

"that was amazing! thanks for the report. One of the things I do miss about LA is the chance to go to events like this"
More…
Loading ...

I'm a composer/french hornist primarily focused on jazz and improvised music and music for the media, especially film and theatre. Most recently I've discovered an interest in sound design and begun a a quest to return the mellophone to jazz as a lead instrument. I've also begun playing the trumpet and am having a ball! ************** Here's the "official" bio: Mark Taylor is one of a handful of talented performers carrying on the improvisational tradition pioneered by the great (french) hornist, Julius Watkins, and is currently the only artist on the international jazz scene bringing new life to the long forgotten mellophone as a solo jazz instrument. Taylor's sound has been described as "rapturous" and "golden" (Coda Magazine); "as fluid and limpid as (the) flute, and as gnarly as (the) alto." (JazzTimes). His innovative style has won him recognition by such legendary artists as Max Roach, who said, "Mark Taylor is a virtuoso instrumentalist...there is no one dealing with the french horn or the music the way he is." A native of Chattanooga, TN, Mark's broad musical background includes performing, composing and arranging. Mark has performed and recorded with an array of modern giants including: Max Roach, McCoy Tyner, Abdullah Ibrahim, Muhal Richard Abrams, Lester Bowie, and Basie bandleader Grover Mitchell. As a featured soloist with Henry Threadgill's Very Very Circus, Mark has toured throughout the United States, Europe and in Asia. As a member of George Schuller's post-modern big band, Orange Then Blue, he participated in a State Department tour of Turkey, Cyprus and Syria., and as leader of his own groups he has performed at the Tampere Jazz Happening in Tampere, Finland, Ljubljana and Maribor, Slovenia, and at a number of clubs in Germany, Austria, Canada and New York City, including Birdland, the Zinc Bar and the Knitting Factory. As a composer, Mark has written for Max Roach, the Ebony Brass Quintet, pianist Larry Willis and was a member/arranger for Max Roach’s So What Brass Quintet. He has also been commissioned to compose for theatre, dance, CD-ROM, placed two songs in the Dollface Productions independent feature film "The Girl", scored Camille Billops' documentary, "A String of Pearls" and, most recently, completed the score for “9/11: The Forgotten Underdogs”, a new documentary about the difficulties faced by the deaf and hard of hearing during emergency situations, and done music, sound design and audio post for “Zero Down O.A.C.”, a dark comedy by Canadian filmmaker Aaron Moseson about the adventures of two used car salesmen in rural Alberta.