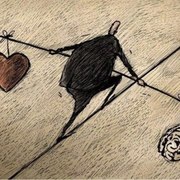 I don't like sharing this, however, it is true. No music training, lower-middle-class family, no instruments, two or three Christmas records in the home...One month after getting sober I had a childish and kind of horrible thought: God, If you would let me play piano, I will believe that you are REAL. I had purchased a cheap weighted keyboard and smashed it out of frustration. Plink Plink Plink....I went to sleep one night and had a dream of a father and a son walking down a road in New Mexico...the boy was two...the father was about thirty. I knew while dreaming that BOTH characters were myself. INSIDE the dream was MUSIC...* I later found out that the Van Morrison I was listening to at the time had loads of pentatonic scales etc...but AT THE TIME...I had given up...even before taking a single lesson..I was about 23 and it seemed ALL TOO LATE for dreams of Julliard...But NO SHIT I heard the MUSIC from that dream and at 2 in the morning feb 1990 i got up and and put BOTH HANDS (a very big deal since I had previously only hunt and pecked with one finger as my method de dessin) BOTH HANDS and Holy Crap I played the music that was JUST IN MY DREAM...OMG i am going to be a fucking MOTZART or some shit...right? I had a dictation recording for business. I sold computers. I recorded it and plyed it over and over and over and over i called everyone that I knew and woke them up and played it for them....I recorded it and I had this feeling that I can never again describe...my GF at the time was like BIG DEAL...but wha what....see it was a nice little ditty ala Satie or Debussy at twelve years old, hahaa. I Imeediately changed over my whole life....but discovered pretty nasty learning disabilities, ADHD blah blah, you name it...but I Was SO SURE...I played the song for graduates of Jullliard and Mannes...good Classical and Jazz Pianists...either they were like so what, jeez dude take it easy or they were like, hes faking something, or like ONE lady VERY VERY PISSED off...the whole thing turned into one giant mess. I smashed into wee tiny little bits, as fucking small as I could make them that stupid wonderful Korg. I started going to the Yamaha showroom on 57th NYC and slowly worked up the courage to make friends at Steinway hall...got to meet Mr Stienway before CBS...Got to play some oif the best concert Ds in the USA anyway...AND sadly and wonderfully the week after Horowitz died...One of his traveling pianos was being sold to a woman from Japan...I got about twenty minutes with an instrument as DIFFERENT IN KIND, not degree or nuance but IN KIND from lets say grandmas old black mildew stained basement..that piano Verses a Bosendorfer or Fazioli HOROWITZ'S *he owned six and they kept one there for him..I think that is the one the Lady bought, that I played. THAT HOROWITZ piano I picked out of a room of seven concert Ds in the back *jeepers the whole place is GONE, It was UNLIKE ANY other concert d by any manufacturer that i had ever played. it jumped back AT you. it LIVED...some of you REAL geniuses must know what the heck I am talking about.....ANYWAY.....True stories...many years later I can barely play through the circle of fifths, but I DO believe in God, and I am hammering away at the MOST simple voice leading compositions that you folks probably did in your teens...I am FIFTY now...and its all over for me and YET: I am ALIVE I have a nice place to live and TIME....and LOVE and for the FIRST TIME I will NOW have the chance to compose and have performed, just locally, and record, my silly little things Wild right? call me a liar, ask anything you like, it was one of the most important things that ever happened in my life....I spend my last four hundred bucks one time trying to record that little composition at Clinton Studios in NYC...they were um..not exactly cool. even though others have asked me to play it for some pros and ONE even CRIED. NO SHIT. so I am the Black Sheep. But FULL OF LOVE and GRATITUDE