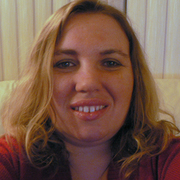 It's so hard to choose just one.

Beata Brandt studied music at California State University, Long Beach, where she earned a degree in music composition. Her interest in composition grew out of a love of the great variety of sounds and textures that brings music into being. While attending CSULB, she also studied piano, voice, and conducting. Beata has performed in the dance piece, The Evil Garden, by Erin Mitchell. The CSULB Studio Orchestra and University String Quartet have performed her compositions. Percussionist, Dave Gerhart, has performed her timpani solo, Flights of Fancy, a work he commissioned. As a member of the CSULB University Choir, she has sung with the Long Beach Symphony, Long Beach Camerata Singers, Pacific Symphony, and Pasadena Pops Orchestra, and recorded for World of Warcraft III. She has also played the piano in the studio orchestra under the baton of Tim Simonec (Diary of Anne Frank, Lost, Alias, The Incredibles, Ratatouille), and recorded for student films. Piano performances include chamber music, piano ensemble, accompanying, and student recitals. Beata has played the piano, harpsichord, or celesta as a member of Collegium Musicum, Studio Orchestra, and New Music Ensemble. Beata has worked as a vocal coach, and church music director. She has appeared in the music video "Outside" for the band Kill the Complex. Beata most recently took part in a one on one mentoring session with renowned film and concert music composer, Bruce Broughton at the ASCAP "I Create Music" Expo, where he reviewed her film music compositions. Beata has played for performances of musicals such as Godspell, Jesus Christ Superstar, My Fair Lady and West Side Story. Besides studying classical guitar, she has accompanied many vocal and instrumental soloists and several choirs. As a composition major, Beata has been awarded the Paul C. Lindsey Memorial Scholarship and the Music Department Talent Scholarship in Music Composition. She has chaired the CSULB College of the Arts (COTA) Student Council and CSULB Composers Guild. As an officer in the Composers Guild, Beata coordinated two concerts of composition students’ works. As chair of the College of the Arts Council, she oversaw the inaugural COTA student and faculty mixer. She is a member of the Phi Kappa Phi honor society, and Sigma Alpha Iota music fraternity. Beata speaks Polish and Spanish, and can sing in Polish, Spanish, Hebrew, French, Italian, and German. Beata currently accompanies several community choruses, and teaches voice and piano. She continues to perform contemporary and classical works as a pianist, accompanist, vocalist, and conductor. Beata lives in the Los Angeles area, and is open for projects in film music, concert music, dance, or piano and vocal performance.