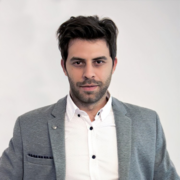 Allen Constantine, also known as Alin Constantin Popescu, is a contemporary film composer, producer and sound designer who has composed in various musical styles. He is working as a music composer providing library music for OmniMusic for Media in New York, Synctracks London, product presentation demos for Sonicsmiths and East West Quantum Leap and commercials for various brands, such as Schwarzkopf, Vernel, Persil. He started composing at the age of 9 and gradually, creating and producing became his main artistic goals as he developed these skills self taught. He finished the " University of Music Theatre and Arts" which helped him better understand the cinematographic world. With many years of experience in the Music, Film and Television Production Industries, Allen Constantine composes music cues, meeting all production requirements for the film and television industry, collaborating with ArtFx School (Meanwhile, Unknown, Sayonara) and directors Nick Wall (Retribution), Michael Billington (The Only Way) and Vlad Paunescu (Live). He has also worked for Echoism Music, Goldstein Music, Castel Film Studios, Maya Visuals and DeMoga Music. In addition, he was chosen between the Top 30 finalists at the Oticons International Film Music Competition and composed the theme for the International Composer Festival Hastings.