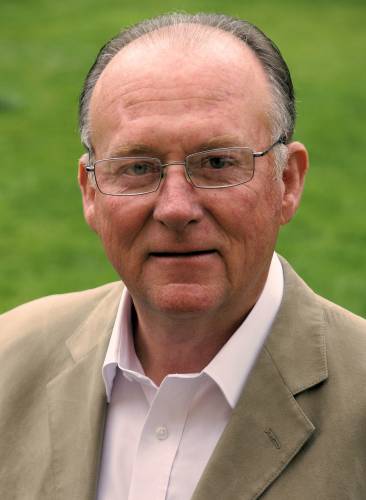 Tell us a little bit about yourself. Your music background and anything else you'd like to share.

I am comparatively ancient in a chronological sense but still feel and think like a 30-year old. Initially I took up music at boarding school at the age of eleven – not because I was particularly keen on music but it was a good way to avoid getting involved in muck and bullets as a member of the school Combined Cadet Force. I took up French horn simply because a near neighbour of my Royal Air Force parents was the band sergeant and played that instrument. I guess my main interest at school was cricket and eventually I became quite decent at the game. As a whole, though I absolutely loathed the school so left at the first opportunity (age 15) and became a junior musician in the British army.

In 1967, I attended a 12-month pupil’s course at the Royal Military School of Music (Kneller Hall) and studied horn under Alf Cursue who had been a member of ‘God’s Own Quartet’, which included Dennis and Aubrey Brain.

In 1968, I was posted to the band of the 2nd Battalion the Royal Anglian Regiment as their principal horn player (it was a good section in those days with 5 experienced players).

In 1975, I was selected to attend Kneller Hall as a student bandmaster – the course lasted three and a half years and was arguably the best time of my life. The training staff were excellent (Harmony and aural training for instance were taught by Gordon Reynolds who was also the organist and choir master at Hampton Court Palace – a suave gentleman and effective teacher). Apart from the harmony, orchestration, arranging, conducting and composition classes we were kept very busy as performers. There were numerous highlights including nearly being blown off the castle ramparts whilst performing at the Investiture of The Prince of Wales; performing ‘live’ on ‘Friday Night is Music Night’ on BBC Radio 3; taking part in the Queen’s Silver Jubilee celebrations and many other prestigious engagements. In our ‘spare’ time, we students had to learn to play and were tested on scales, arpeggios, quick and slow solos and sight-reading on every wind instrument from flute down to tuba. This was a difficult thing to achieve, but as intended has proved rewarding when composing or arranging for such instruments and being fully aware of their limitations (e.g. which trills are not playable on woodwind instruments), and in understanding the difficulties experienced by performers.

How would you describe your musical style or styles?

My musical style is principally classical but in recent years has veered in a slightly more Avant-Garde direction. I believe that mathematically there is an almost infinite number of compositions that can be produced simply by utilising ‘standard’ major and minor keys and modes, and it is this belief that kept me on the straight and narrow as a composer for many years. My understanding of harmony is firmly based on Kitson’s harmony books I, II and III and, if I have a moment to spare, I will regularly go back to book I to ensure I have the basics firmly in place in my works. Recently, after a little experimentation, I have moved into a more modernistic world of discordant and chromatic harmonies: I find these more in tune with modern expectations whilst also facilitating greater degrees of expressiveness in my writing.

What and/or who are your chief influences?

The first recording I ever owned was Dennis Brain performing Mozart’s four horn concertos and concertina. I can distinctly recall feeling so pleased (at the age of 12) that I turned it up full volume and opened the drawing room windows to share this fabulous music with my neighbours, not all of whom were as enamoured of it as I was. I think my love of classical music grew directly from these archetypal examples. Although I compose for many disparate groups of instruments, I will always consider the symphony orchestra as the ideal medium for expressing myself musically.

Can you name something you did in a piece of music of which you are particularly happy?

My first foray into the Avant-Garde was with a composition for orchestra that I called Thema Obscurante. This was not the original title and it was first composed for piano. A commentator on CF thought the original no more than an exercise in exotic harmony and wondered where the melody was. I immediately took up the challenge and arranged it for orchestra where the initially obscure thematic material could more easily be expressed and subsequently discerned. I was so pleased with the result that I extended it to three movements and received (on CF) considerable praise for its inventiveness and overall musicality. I initially thought of this as no more than an interesting diversion from my usual style, so reverted to type with subsequent works that I thought might have greater public appeal. An example of this is a piece for horn and piano entitled Orion the Hunter which I think has universal appeal and is written in the mould of Ron Goodwin or similar. Having satisfied myself on its commercial viability I again moved onto a slightly more advanced route and composed The Road to Perdition.

Are you published anywhere? How could someone who is interested purchase your music?

I publish my music on numerous sites, the two main ones being Score Exchange and Sheet Music Plus. All my scores are available via https://www.scoreexchange.com/profiles/Stephen-Lines

If you could offer one piece of advice to other composers, what would it be?

Nowadays, with the advent of musical software programmes with an instant playback facility such as Sibelius, (which, incidentally I use in conjunction with NotePerformer3), there is no excuse for not writing with one’s ears. My basic principle is that if it sounds good it is good, irrespective of what the ‘rule book’ says. My only piece of advice is to forge ahead and write what you as an individual enjoy. Remember that the process of writing music is not always easy but there are few things in life more satisfying than sharing with others something that you personally have created.

If you could put 3 pieces of your music on the Voyager spacecraft for dissemination to the stars, what would they be? Also, please give a brief description of each piece and a link.

I think I can illustrate how musicality can grow with experience and over time by inserting here my first published composition that was written during my final ‘Competitions’ year at Kneller Hall. It is a military march initially entitled Gordon’s March (after General Gordon of Khartoum – the founder of my boarding school) but subsequently amended and retitled Die Soldaten von Celle (The Soldiers of Celle) and used by the massed bands as the march on for the Celle Tattoo in 1980. It was subsequently recorded on an LP entitled ‘The Vikings’ by the band of the 1st Battalion the Royal Anglian Regiment. https://www.youtube.com/watch?v=_0ZZZqF5WIk&t=26s

Second is a piece for symphony orchestra called Bramshill – a 50th Anniversary Concert Rondo. This was composed at rather short notice and performed live (conducted by me) by the British Police Symphony Orchestra at the National Police Staff College at Bramshill in Hampshire in 1998. The music is written in large ternary form. There are features within it that depict and draw together various facets of Bramshill House as a Jacobean dwelling with that of its current role as the national police staff college. After a declamatory eighteen bar opening in the key of C minor, the piece leads towards the principal theme that is introduced by the horn, quietly accompanied by chords from the clarinets dipping in and out of their chalumeau register – a haunting, ethereal theme that depicts the mystery of the ancient building and its numerous reported wraiths. The theme evolves and is pronounced giacoso in the strings with light accompaniment in the higher woodwinds. A restatement of the main theme is followed by a section, fugato; this depicts a police officer on the beat in the early hours of a cold, wet winter’s night. This theme then transmutes into a quasi-stately dance such as may have been performed in Bramshill’s great withdrawing room or its long gallery in the 1600’s. A series of 6/3 chords then develops into what sounds akin to a police siren; the section culminates in a wash of sound with police theme, stately dance and siren sounding simultaneously. In the final section, the principal theme is re-iterated in various guises and sub-themes are further explored. https://youtu.be/zzlwMxlFThc

Finally, my latest offering The Road to Perdition composed this year (2019). This programmatic piece describes the kind of journey experienced by Christ in Hades; Faust, or Dante (The Inferno): It ends with a triumphant brass chorale that depicts the hero, after having overcome the trials and tribulations of such a trek, achieving a high state of wisdom. It is a further example of my progress towards a slightly more modernistic style of writing and I have been humbled by the extraordinarily kind comments about it received from fellow CF members and elsewhere. If asked, I would say this is the highest point of my composing career to date. https://youtu.be/jKGFcBlUt8Y

Is there anything else you would like to say?

Never say die – we all know the old rune that genius is 90% perspiration and 10% inspiration. That is not to say that I or anyone else on CF might actually be adjudged a genius, but the principle holds good…work, work, work until you are satisfied with what you have achieved…and remember it is never too late to learn.

Finally, I would like to pay tribute to CF – I think we are very fortunate to have such a platform with so many talented people from which to learn and with whom to communicate. Keep up the good work.