I often write program pieces, but this one is abstract. So I gave an abstract name to it first, later adding a program name "Anaerobic".

Big thanks to Irina Kazanskaya for playing piano part for this recording. I am very glad that we had a chance to work together and I understood how a musician perceives this piece. We discussed the piece several times and I recomposed several sections, which sounded strange and were more difficult to perform. This was a beautiful experimental feeling. 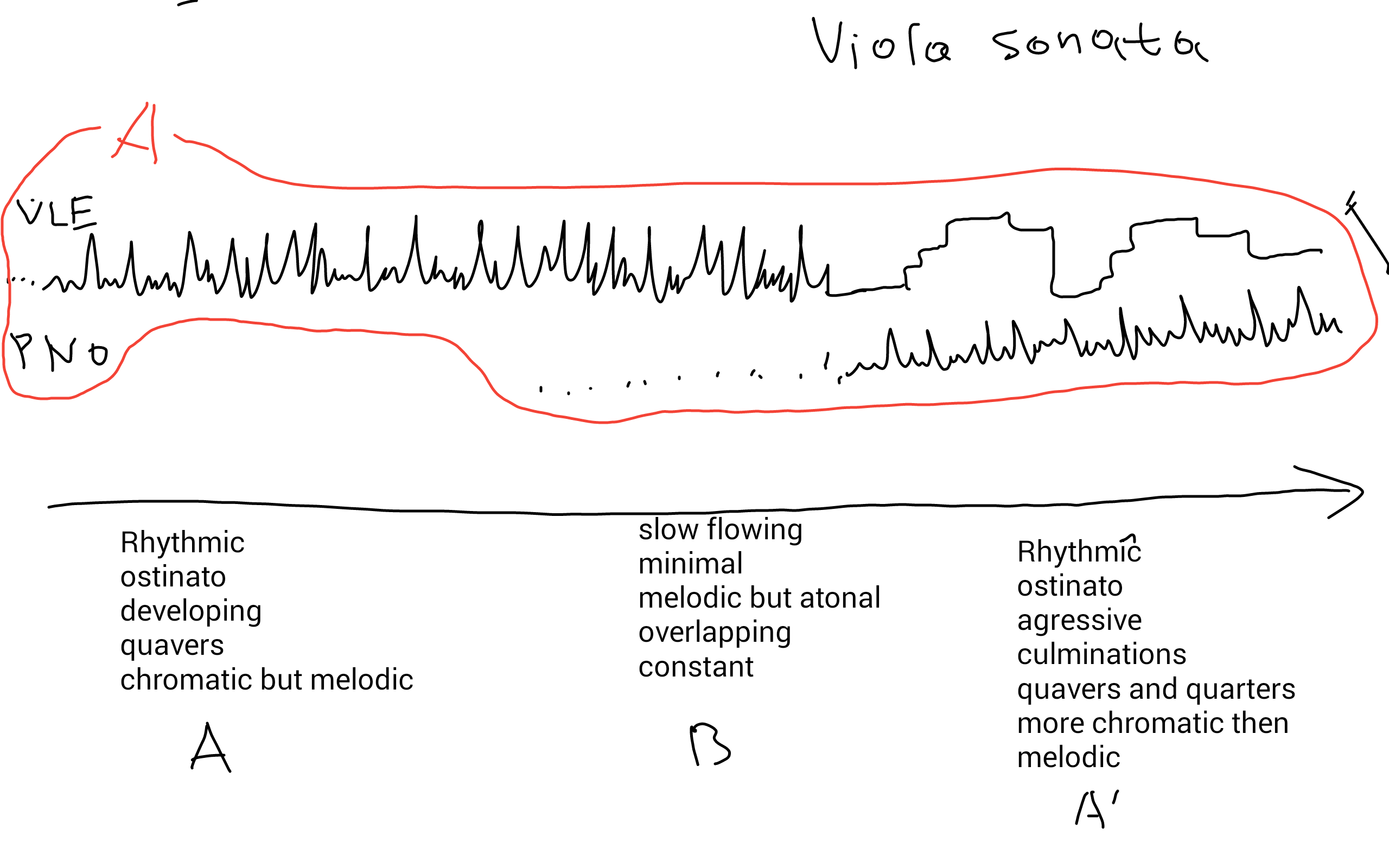 The piece consists of three parts. First and third parts are more rhythmic, ostinato. The second part is more light, minimal. The third part connects motives from first and second part together.

I started composing piece with drawing a graph of viola melody and piano of the first part. I was not thinking about the number of parts and their characteristics, until I composed the whole first part. I wanted to make first part all-sufficient and only then create the whole piece from it. Only after writing the first part I selected several keywords for each part and wrote them on the graph.

So, the first part was created in information vacuum and was more dependent on my intuition and ear than on rules. First I wrote the main melody for viola in 14-18 measures by singing it to mobile phone sound recorder (then it did not have additional C and G notes that created intervals). The idea of the melody was that the same note was sounding and gradually more notes were added. Then my critical thinking posed a question: "is it too tonal?" I played a different variant on piano, which now is viola melody in measures 10-13. I was looking to replace first melody with this one. Then I found out that they can live together and added only one linking note at the end of measure 13. I added accents to create a rhythm, that was independent from melody.

Then I added slowing down introduction on one note (m1-m9). When I was writing introduction, I imagined how musician goes on stage and begins playing. I wanted listener to prepare to the next section: I give slow rhythm first, then fast rhythm using one note.

I was not thinking about meter when I was writing this.  Actually, I was glad to find out that this intuitive melody finished on the second quaver of m23. Next melody began on the second beat, shifting meter.

In m23-m25 I continued viola line. After analyzing this section later, I decided to repeat m14-m17 with little changes and prolong transition from viola to piano (m25-26). Changes were little: for example, first quaver in m14 was shifted forward to avoid simultaneous change of tonality and adding new instrument (piano). Also, I avoided changes that would make repeated melody to be completed (affirmative, finishing with tonic), because there was no important change after the repeat.

Then I started to work on the piano accompaniment in m14-25. My idea was to gradually add piano sounds and them pass melody from viola to piano completely. That is why piano plays little notes in the beginning, in m23-25 density increases and in m26 there are no pauses any more. Piano here uses mainly the same notes as viola in m10-17. Piano has its own melody - I wrote it in counterpoint style to create melodic accents where viola does not have melodic or dynamic accents. So, these three accents form a dense network of independent accents, which sometimes overlap - and as a result initial uniform rhythm comes to life.

Later I created piano melody (m27-55), which actually repeats and develops viola melody. It ignores meter as initial melody, but sometimes syncs with it.

Then I layered slow dissonant viola melody above this piano melody. As in other places, I tried to place viola note changes where there were no accents in piano (in counterpoint style), increasing coherence. Melody was initially created in Sibelius.

After that I started to add color by adding double stops in viola and piano. These double stops formed another layer of accents, which again was out of sync with existing layers of accents (melodic, dynamic). For viola I used only double stops with one open string to make performance easier. This approach creates effect of two violas, one of which playing only open strings.

When adding intervals in piano I tried to choose notes that do not appear around (Schoenberg atonal dodecaphony approach, which allows to vary sound spectrum of the uniform rhythm). Piano plays in low register and small intervals (2nds, 3rds) sound similarly dissonant. I used percussion principles: similar intervals create their own rhythms by repeating. For example, starting from m27, interval C-Eb forms its own rhythm. This adds one more rhythm to the network of accents, discussed above. When possible, I favored dissonant intervals, because they made sound richer.

After all this, initially simple monophonic piano part was made complex and interesting.

Then I started to work on the second part. Its idea is using overlapping minimal melodies, independent from the previous melodies. Only at the end of the second part some elements of the first part reappear - doubling melody with single note.

Second part starts with a simple melody, that I sang to my recorder. Later melody is repeated and additional notes are added horizontally and vertically: filling pauses, overlapping melodies and forming intervals and rhythmic accents. Only notes of G major are used in second part, except for three noted D-Eb.

The third part brings melodies of first and second part together. First a transformed melody of second part appears in m99. Then it repeats several times, becoming more and more similar to original melody of the second part.

In m112-113 there is a crossfade between viola and piano.Viola starts to play melodies resembling the second part. Gradually tension increases by moving piano melody up and increase of dissonance in viola. In m125-126 there is a parody of culmination with one note H, which is prolonged and then C note is added, making it broken. The parody of the culmination derives from its absolute consonance and transparence (octaves only), which contrasts with previous texture. Before culmination viola and piano lines become parallel, which intensifies movement into culmination.

Then C note remains alone. Dissonance in culmination and left note signify that it is not the end of the track yet. Several piano melodies derived from second part melodies sound over the C note in viola. They sound detached due to dissonance with viola notes.

The higher the dynamics of the note, the less low frequencies are pronounced. Until I finished the piece, I did not rise dynamics abouve mp and only sometimes lowered it below. This allowed me to always keep the level of dynamics, where pitch is distinguishable and rich in the whole pitch range. This allowed me to hear the interaction between the notes better, without them suppressing each other. This was especially true with staccato notes. They already sound not very melodic due to there length.

After finishing the piece I started to place dynamics indications. Dynamics was flat until m27. Then viola starts to play short phrases. I used a common approach to increase the expressiveness of the phrases - starting phrase with cresc and ending with dim. To stress the dynamics changes and hide the constant rhythm of piano, I gave piano dynamics, opposite to viola. The same for m116-118.

In m120-132 I synced dynamic changes for more transparancy.